A few weeks ago I picked up Alejandro Jodorowsky’s Psychomagic, essentially an exposition of his theories of ritual therapy. I’ve been a fan of Jodorowsky for a while, and it’s been great to get a closer look at the thinking which underlies his work.

Jodorowsky is first to admit that his method is more art than science, with only anecdotal evidence for the method’s efficacy. In one example, a woman feeling adrift and grappling with feelings of absence and abandonment following her father’s suicide is told to buy thirteen oranges, giving twelve to patients at a hospice and eating the thirteenth in exactly twelve minutes. She reports experiencing connection with the hospice patients that she had longed to have with her father, and while eating the final orange, experiences a new gratitude for her own life.

Some of the prescriptions seem a bit fantastic (one man, struggling in business, is told to tape gold coins to the soles of his shoes, so that all day he will be walking on gold), but I cannot help but see a certain logic to this theater. Someone lacking confidence cannot be given confidence simply by speaking affirmations in a mirror — rather, confidence is built piece by piece by acting in ways which build self-esteem. In a similar way, I can see why someone struggling with past traumas or failures may need to take some actions which allow them to overcome those experiences. The key idea is that words alone are not enough; it is meaningful action that matters: hence ritual therapy. Knowing exactly which actions to prescribe for a given ailment is, of course, the tricky bit, and the reason why Psychomagic is the most fringe of practices.

I can relate a recent experience which I would describe as “ritual therapy”, concerning a four-day solo backpacking trip I took in the north of Israel. 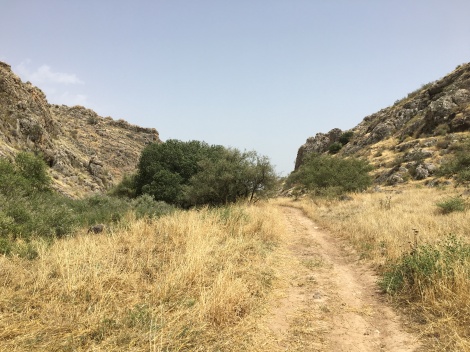 If the trip was the therapy, what was the trauma? It was twofold, although admittedly to describe these experiences as “traumatic” is to be a bit, well, dramatic.

The first incident occurred during the Summer of 2010, when I went on a camping trip with four other friends. At one point during the trip, we decide to go exploring the hills around our campsite. The terrain was sparse woodland, with hills, cliffs, and the occasional pond. During our jaunt, we arrive at the base of a rocky cliff, and we decide to summit the face. We begin to ascend, with me in the rear of the group. About halfway up, I start getting nervous: we are climbing ad-hoc, with handholds and footholds being whatever seems to make sense. We have no guarantee of finding a path, and at this point we’ve set ourselves up for quite a drop. I’m feeling shaky, and I eventually tell the group that I’m turning back. They encourage me to continue, but I am resolved. I descend while they continue their climb. A short while after I reach the base, I see them complete their summit and reach the top of the cliff. By this point, I am exploring the wooded area adjacent to their hill, and telling myself I’m having a good time, but I’m starting to feel a sense of distress. I see them at the top of the hill, and start to think about the best way to rendezvous. Eventually I circle around and we are reunited; but there’s a faint disconnect. They went forward while I turned back. A faint disconnect which feels to me like a gaping chasm. Everyone is quite nice about it (one girl in the group took care to later emphasize the other activities which we “did together”), but what was done was done. A number of years later, I was talking to one of the friends who had gone on the trip, and he brought up that moment when I turned back. He asked if I ever thought about it, to which I responded I did. He posed the question of what might have been different had I stayed with the group. I’ll never know. But I do know that that moment of retreat has stayed with me ever since, much brighter in my memory than any other aspect of that trip.

The second incident occurred in the Fall of 2012, when I was living on the kibbutz in Israel. I had heard of the “Sea to Sea” hike, a four-day trip through northern Israel, starting at the Sea of Galilee and ending at the Mediterranean. I was interested in giving it a try, and recruited three of my classmates to come with me (two boys, two girls in total). We gathered food and equipment, I got a map, and we set out. In my mind trip is going well enough, but halfway through the other three tell me that they want to abandon the trail and take a bus back to the kibbutz. I’d like to keep going, but I’m not ready to finish the trip alone. We go back. While not as difficult a retreat as before (in large part because we abandoned the trail together), it was another lingering memory of turning back instead of going forward.

These incidents has left a mark on me; creating a narrative of someone who “turned back”, who didn’t have the skill/strength/fortitude/courage to press onward. And while I enjoyed many professional and academic successes in the years to come, I failed to push myself in the outdoors, and so nothing I did quite took away these feelings. Which takes us back to the trip I completed.

As you may have guess, this trip I finished was the same trip that I abandoned six years prior. I undertook the trip solo, not having found anyone with an aligned interest and schedule. The route involved hiking about 20km per day, through open country and rocky riverbeds, crossing rivers and going long stretches away from water, people, and civilization. While not the most dangerous of all possible routes, there were risks involved with hiking solo; in this case, the risks were the point. I needed to communicate to myself, not with affirmations but with actions, that I could complete a non-trivial undertaking in the outdoors. Completing the trip allowed me to release these long-held doubts and feelings of failure.

I returned from the trip with a certain feeling of lightness. I had done the thing. I wasn’t the person I was worried I was. I had redeemed my earlier failures. It was a ritual therapy: in a sense, an act of Psychomagic.

One response to “Ritual Therapy”